Not really GMing advice, but I wanted to share a project my wife and I und4ertook this last weekend.

I am starting a new table top game and hosting it at our place.  The dining table we have isn't really larger enough to 7 or 8 people, so I wanted something larger.  a friend who hosts games at his place from time to time has a ping pong table that they covered with some cloth, which serves them well for a multitude of tasks.  Effective, but not really what I wanted

Instead of trying to build a complex table we settled on something that would provide more surface and seating area.  Since we already a very solid dining table we opted for a surface that would sit on top if it. 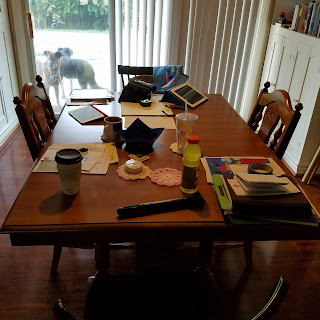 [The base for the gaming surface]
Our table had a pair of leaves that would have probably made it large enough, but they have managed to escape, probably during one of our moves.

So, with an idea in mind we went out to Lowe's to pick up the needed supplies.  We got three 16 x 96 inch solid wood panels to be the top.  These would be held together with nail plates (I'm not sure that is what they are actually called) to form the top.  8 of those plates would be used to held the panels together.  The top would then rest on the top of our current dinning table with a wooden box that was just bigger than the current top.  This frame would keep the top from shifting around. 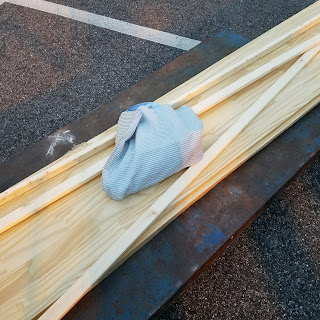 [Ready to load in the truck]
The frame would be constructed from 1x2 lumber screwed to the underside of the panels.  We needed screws that would go through the frame and into what would be the top, but not through the top and screws to go through the nail plates and into the top but not go through.  This meant we needed two different kinds of screws.  We made sure to eyeball the length and once we were satisfied we picked up the rest of the supplies. 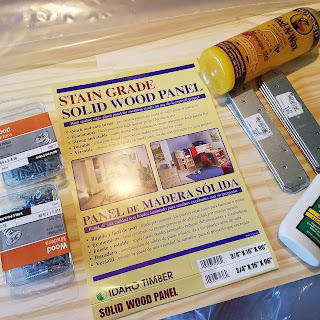 [all the goodies]
We got some wood glue, because I thought it might be a good idea to glue the plates down as well as screw them in.  We ended up not doing this.  So, three panels to make up the top, the lumber to make the frame, plates to secure the panels together and screws to hold it all together.  We also got a bottle of Howard Feed-N-Wax.  It's a wood treatment made from bees wax.  My wife uses it on sewing machine cabinets and we thought it might be a better solution that trying to paint or stain the top.

Putting it all together

There was measuring and marking and anchoring of the plates.  Then we realized we'd put two of them in the wrong spot.  These sorts of things happen, and luckily it was easy to rectify.  We cut the 1x2 lumber for the frame 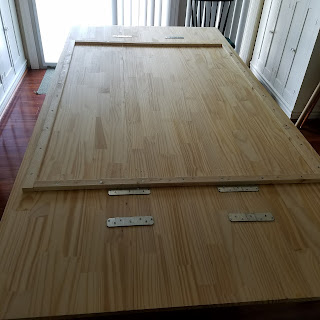 After the framing bits were cut and screwed to the underside of the top we were ready to give it a few coats of Feed-N-Wax.  For that we took it outside and set it down on some saw horses and took advantage of the nice weather.  I hit the whole top and the edges with 220 grain sand paper.  the edges had a few splinter spots and I wanted to soften the corners a bit.  Once that was done we started to apply the wax.  Put on a liberal coat, give it 20 minutes and wipe away any excess.  We went with two coats of wax, which only took about an hour total.

The finished product
It was time to bring it in and set it on the table to check the fit.  It's not terribly heavy, but being 8 feet long it's a two person job to move it around.  We brought it in the house and set it on the dining table. 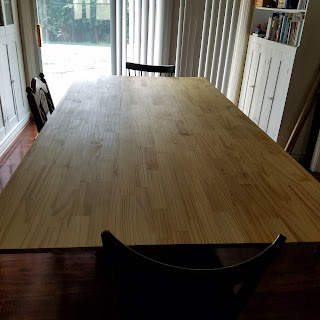 It fit pretty good, and it's very stable.  The gap between the panels that make up the top is a little annoying on one end, but overall it came out really well.  Now we have plenty of room to fit my players and plenty of table surface should we want to use a map of some kind for miniature play. 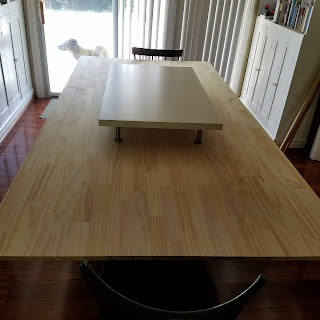 We had made a small table topper for playing board games on the old dining table.  It provided an elevated surface to put the board on and play space below for markers and drinks.  There are lights under the edge as well, since the light in the dining room was pretty bad.  We put that on the new table topper as a reference.  Still plenty of room for players, character sheets, and books.

Not counting the new drill I needed to pick up (my cordless gets tired fast these days) the project came to about $150.00 and roughly three hours out of our day.  I think it was worth it, I'll have to see what my players think once we start playing.

Have you made a table for gaming, or been thinking about it?  Let me know in the comments.  Until next time, keep playing!
Posted by secretoracle at 8:00 PM